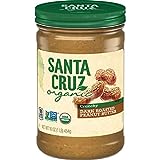 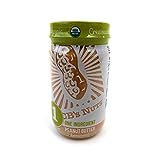 A surprising tidbit I learned was that peanuts not carefully grown can contain a toxic mold, aflatoxin which is believed to be a cause for cancer, and the FDA regulates how much contamination is allowed in foods. The major PB brands are believed to be less risky when it comes to aflatoxin, under the assumption their peanut sources are more closely monitored before they’re purchased.

Another concern for peanut butter, which has been in the news is salmonella poisoning. It ended the likes of the Peanut Corporation of America and made Peter Pan pay $11 million in fines. The belief is that major PB brands are more of a risk for salmonella than indie brands, since they use shared facilities that handle other foods.

Okay, so if you’re still eating peanut butter after that, in comparison to other nut butters, it’s at least better than almond butter environmentally (and also other tree nuts). Almonds consume large amounts of water and are primarily grown in areas of California that were once deserts, fed by aqueducts and aquifers that are surrounded in controversy. In contrast, a majority of peanuts are grown in the southern US. Processing wise, there doesn’t seem to be much of a difference in environmental impact between different nuts.

In regards to carbon footprint, 1kg of peanut butter produces 2.88 kg CO2e. In comparison, an equivalent mass in meats typically produces 5-10 times as much. Organic peanuts are mostly grown in China and elsewhere abroad, so they have a higher transportation footprint. However, personally, I think supporting organic is worthwhile to incentivize American farmers to switch over.

So, as far as packaging options go for PB, it’s either glass or plastic. Glass is heavier and prone to breaking, so is less efficient when being transported long distances. So technically, CO2-wise, if the peanut butter isn’t produced and packaged locally, you should buy plastic (ideally recycled). However, in my personal opinion, it’s best to stick to glass due to overall ease of recyclability and avoids the environmental hazards of supporting plastics production. If you’re still gonna buy plastic, you should note that plastic squeeze pouches use less plastic than rigid containers, so the squeeze peanut butters can have less of a footprint.

To avoid the packaging conundrum altogether, it’s probably best to purchase peanuts in bulk and grind them into your own reusable containers. Most grocery stores have grinders you can use, and you can bring and pre-weigh your own container.

Another thing to pay attention to are common additives, such as palm oil (associated to tropical deforestation), hydrogenated oils, added salts, and sugars (all health concerns).