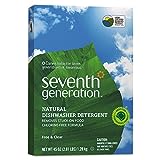 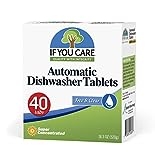 If You Care Dishwasher Tablets 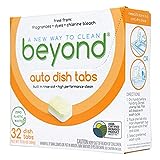 Prefer
Dishwasher powder in a plastic-free container and products that list their full ingredients. Certain pods/tablets are alright.
Avoid
Liquid detergents, fragrances, and trying to use regular dish soap as a substitute.

Powder vs Pods vs Liquid

Looks like dishwasher powder is the way to go, it can be packaged efficiently and typically comes in a recyclable/compostable cardboard box. Common brands like Cascade and Finish have boxed powder options, however they’re owned by corporations with poor track records. 7th Generation is probably the best easily-available option. One note I learned is to play around with the amount of powder you use per load, more isn’t always better, as less can sometimes reduce residue.

Pods are the next best bet, though the biodegradability of the polymer film wrapping has been called into question. Typically, this film is Polyvinyl Alcohol (PVA) which dissolves in water, however it is an oil derived product and some studies are questioning if the remnants can have an impact on aquatic life, though it’s yet to be proven. Questions aside, if you’re not into powder, then these are way better than anything that comes in plastic packaging.

Liquid dishwasher detergent just doesn’t make sense. They typically come in plastic bottles, which not only are harder to recycle, but are oddly shaped and inefficient to transport. Plus, they’re filled with unnecessary water which just adds another layer of inefficiency.

I always like looking for DIY options since that gives the most control over ingredients, however, this time I was convinced that it’s probably not a good idea to make your own. Mainly, this comes from the fact that soap and detergent aren’t exactly the same, and most DIY recipes rely on using soap. Detergents are better at dissolving quickly in water (especially hard water) and do not leave soap scum and will likely do a better cleaning job without the risk of damaging your machine. However, some swear that DIY recipes work great, so you do you!

Some dishwasher detergents could contain chlorine, phosphates, triclosan, parabens, and phthalates (some from fragrances). So it’s best to avoid fragrances and look for products with a small ingredient list that also clearly state their product is biodegradable. Also, seek detergents without palm oil or at least contain only responsibly sourced palm oil.